Mondays Are For Criticism

It’s a Monday Morning. If you are a church leader, and you haven’t been criticized yet today, consider yourself lucky.

I often think that Monday morning should be a weekly church holiday. Monday is the day that the critics show up the most.  And that includes critics from your congregation. If you’re a staff member, it’s the day that criticism comes from your supervisor or lead pastor. And if you’re a lead pastor, it’s the day you hear criticism and feedback from your board, elders, and staff (as well as everyone that you offended by your sermon yesterday).

And criticism can be good.

Tim Sanders points out some ways that, if you need to offer criticism, to do it wisely. Here we go.

Tim writes: Part of your Emotional Talent arsenal is the ability to give feedback to help your people improve or succeed without unduly creating negative emotions.

The way to do that is to follow a few rules:

1. Wait a little while before issuing criticism. Let it simmer, or at least let your first wave of emotions subside. If you can, sleep on it before you act.

2. NEVER use email to issue criticism. It’s very weak at relaying your intentions (coach or dictator?). Have the guts to give it face to face or at least over the phone. This will increase your effectiveness by 500% according to Mehrabian’s research on how others decode our messages for intent.

3. Objectify failure. When a product turns out wrong, it’s still a thing. When an event doesn’t come off as it should, it’s still just a thing. Too often, we personalize it, associating people with the fail. To that I say, “Criticize the outcome, not the person.” One CEO at a software company used to gather this development team around a conference table when a product launch failed, putting a box in the middle for everyone to deposit “project artifacts” such as discs, mock ups, emails, etc. He had each person take an object out of the box and talk about the why-it-happened and how-you-feel about it. It really worked – sucking the funk out of the room and focusing on 2.0.

4. Last but not least, don’t be Waffly when you give criticism. If you are going 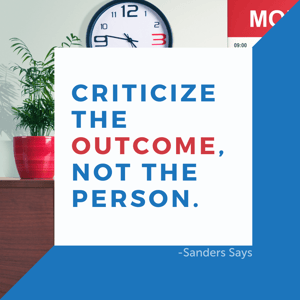 to say the outcome was below expectations, don’t hedge it with a bunch of might’s maybe’s or other wamby pamby talk. You need to be very clear, or you’ll end up in a debate, giving forgiveness way to early or losing any credibility for future feedback. Your folks need to know that you are strong in your beliefs, even if you are thoughtful in your delivery.

Just wondering … have you been criticized yet today? What about?

The Biggest Church Problem You Have Today

A Critical Step to Making a Great Hire